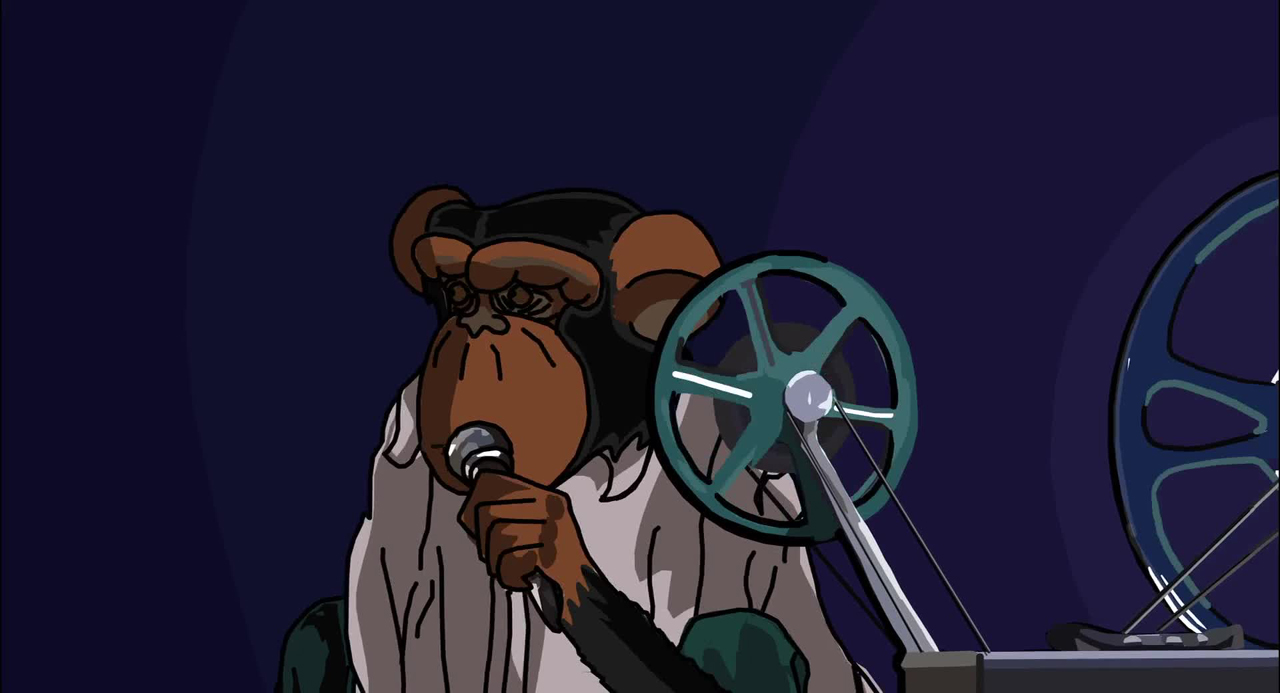 But when it gets really interesting I think is when we use that same system of symbols to communicate all the abstract and intangible things that we’re experiencing. What is like… frustration? Or what is anger or love? When I say love, the sound comes out of my mouth and it hits the other person’s ear, travels through this byzantine conduit in their brain through their memories of love or lack of love, and they register what I’m saying and they say yes, they understand. But how do I know they understand? Because words are inert. They’re just symbols. They’re dead, you know? And so much of our experience is intangible. So much of what we perceive cannot be expressed. It’s unspeakable.

And yet you know, when we communicate with one another and we feel that we have connected and we think that we’re understood I think we have a feeling of almost spiritual communion. And that feeling might be transient, but I think it’s what we live for.”

Chris Kelvin: “How about you? How are you doing?”
Gordon: “Depression along with bouts of hypomania and primary insomnia, suggestions of agoraphobia, obsessive-compulsive disorder, shock, fatigue, denial.”
Chris Kelvin: “None of which is unusual given the circumstances.”
Gordon: “I know.”

Young Ed Bloom: “It was that night I discovered that most things you consider evil or wicked are simply lonely, and lacking in the social niceties.”

Ed Bloom (Age 10): “I was thinking about death and all. About seeing how you’re gonna die. I mean, on one hand, if dying was all you thought about, it could kind of screw you up. But it could kind of help you, couldn’t it? Because you’d know that everything else you can survive.”

Young Ed Bloom: “The biggest fish in the river gets that way by never being caught.”

Padre Francisco: “Freedom without a life is not freedom.”

Ramón Sampedro: “A life without freedom is not a life.” Old Sophie: “A battleship?”
Howl: “On its way to burn cities and people”
Old Sophie: “The enemy’s? Ours?”
Howl: “What difference does it make?”

Howl: “I feel terrible, like there’s a weight on my chest.”
Young Sophie: “A heart’s a heavy burden.”

Old Sophie: “When you’re old, all you want to do is stare at the scenery.”

Eternal Sunshine of the Spotless Mind (2004)

Clementine: “Sometimes I don’t think people realize how lonely it is to be a kid. Like… you don’t matter.”

Mary: “Adults are, like, this mess of sadness and phobias.”

V: “…A building is a symbol, as is the act of destroying it. Symbols are given power by people. Alone, a symbol is meaningless…”

Gordon Deitrich: “You wear a mask for so long, you forget who you were beneath it.”

The Hitchhiker Guide to the Galaxy (2005) The Book: “In the beginning the universe was created. This made a lot of people angry and has widely been considered as a bad move.”

Ford: “They don’t think, they don’t imagine, most of them can’t even spell, they just run things.”

The Book: “Presidents don’t have power; their purpose is to draw attention away from it.”

Zaphod: “If there’s anything around here more important than my ego, I want it caught and shot now!”

Yuri Orlov: “There are two types of tragedies in life. One is not getting what you want, the other is getting it.”

Yuri Orlov: “You know who’s going to inherit the Earth? Arms dealers. Because everyone else is too busy killing each other. That’s the secret to survival. Never go to war. Especially with yourself.”

Yuri Orlov: “…There’s nothing more expensive for an arms dealer than peace.”

Yuri Orlov: “…Often, the most barbaric atrocities occur when both combatants proclaim themselves Freedom Fighters.”

Yuri Orlov: “I had a flair for languages. But I soon discovered that what talks best is dollars, dinars, drachmas, rubles, rupees and pounds fucking sterling.”