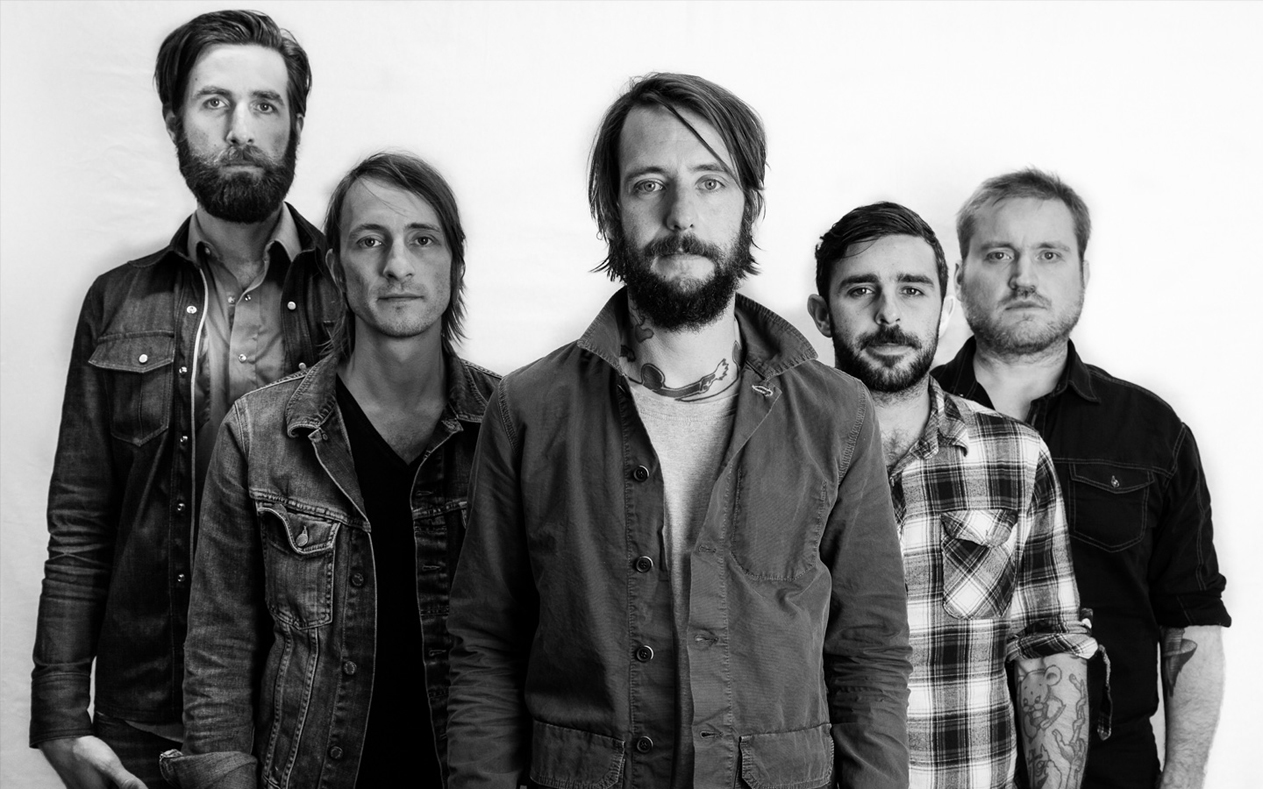 BEN BRIDWELL, founding member and lead singer of Band of Horses had never envisioned himself, back in his teens, as being involved in music in any way other than a fan. That, as we all know, changed after he moved to Seattle, where, with time, he started Brown Records, which released the first two Carissa’s Wierd albums. After the split-up of Carissa’s Wierd, Matt Brooke, one of its former members and longtime friend of Bridwell, helped him to learn play guitar. This also encouraged Bridwell to write his own material and thus the world gained a phenomenal artist.

From Band of Horses‘ first album, Everything All the Time (2006), which includes widespread hits such as The Funeral, to their second, Cease to Begin (2007), including the also famous single No One’s Gonna Love You (like I do), through to their third, Infinite Arms (2010), which carried a Grammy nomination in the Best Alternative Album category, to Mirage Rock (2012) and Acoustic at Ryman (2014 – LIVE), which features stripped down versions of ten of their best known songs, the wild galloping of their sound remains free and untamed.

SRM: Ben, as I’ve just mentioned, your work with Band of Horses was rewarded with a Grammy nomination for Best Alternative Album; how do you think your former high school teachers, who asked you to drop out from school, took these news? Maybe, it was a good thing for you to leave the educational system at that time, after all, wasn’t it?

BEN BRIDWELL: Ha! I definitely don’t regret my decision to leave. It could get a little sticky explaining to my kids when they’re older but, I’m quite pleased with the way things have turned out. I would doubt that the teachers even remember me. I was in trouble more for not showing up to classes than for behaving poorly. I kept mostly quiet and left for good after a year and a half of high school.

SRM: How do you think regulatory education could be adapted, or even modified, as to bring out people’s real skills as well as their true callings and support them in their development?

BEN BRIDWEL: It may sound obvious but a major problem in American public schools is the lack of funding. Teacher salaries have long been an issue and the problem has only gotten worse in the ever struggling economy. Also if they had programs that teach kids how to listen to Dinosaur Jr and smoke weed all day then I can think of a couple of kids that might’ve stayed in school.

SRM: That would be a hell of a program… (laughing). After Carissas Wierd’s break up, what was that motivated you to work so hard in order to be able to create and play your own music? How did you live that time when you founded Band of Horses?

BEN BRIDWELL: Well I didn’t want that band to break up but it was out of my control. I really enjoyed the life on the road, the practicing, and dreaming of bigger things. Also I really hated the shitty jobs I had to keep between tours. Now, those jobs were all I had. Also I’d become very opinionated about music and jealous of other bands doing so much better than we ever did. I figured I have no place to complain until I try the songwriting myself. At least that way I’d only have myself to blame if I were to make a career out of washing dishes for minimum wage.

SRM: Hidalgo (2004) with Viggo Mortensen and Omar Sharif and Seabiscuit are two of my favourite films: in both, the strong and noble spirit of the horse is extolled. What does the horse represent for you, Ben?

BEN BRIDWELL: Strength, beauty, and unpredictability come to mind of course. I have a strange moral dilemma when it comes to riding though. The depressing thought of this beautiful beast being tamed purely for the benefit of man vs the elation of actually controlling such a force of nature. I love to ride, and I’m secretly terrified by a horse’s power at the same time. I admire and pity the horse.

SRM: It’s not so strange, having that particular dilemma; I share it. The sound of Band of Horses is characterised by a deep, beautiful sense of melody, and ballads and up tempos have a way to surprise in the fluidity and gusto of their harmony variations.

The Funeral, from you first album, Everything All The Time, has been used in numerous TV series, films, video games and advertisements. What’s the philosophy behind its lyrics, the base of its conceptual story?

BEN BRIDWELL: The basis of The Funeral was just really the start of me whining about my aversion to social occasions and Holidays. The pressure of say New Year’s being the best party night of your life, or Christmas being this forced togetherness. I was quite the pessimist in those days when I wrote the song.

Now I quite like the forced togetherness and celebration around meaningful holidays. I still think a lot of them are dogshit in origin, but can enjoy the party in my new-found mellowness. I think I added some more personal story in the song concerning mortality and probably related it to a romance at the time, but I haven’t thought about it for so long. I’ve blocked it from my memory enough to still enjoy playing the song every night.

SRM: I can also totally relate to that blocking-from-memory-and-live-on strategy, too, as many others out there probably do… Ryan, Tyler and Creighton have been with you in BOH for several years now but the full line-up changed several times. Have you had the feeling that, at some point, what you created, started to have a life of its own, like if it was almost organically evolving by itself? Or, on the contrary, have you always had a very clear idea of its sense and purpose and that’s why the line-up had to change, in order to adapt to that vision?

BEN BRIDWELL: Before the current line-up it was always in flux. Even before the first album came out there were ex members of Band Of Horses. Most of these past members filled their roles perfectly for that time but for one reason or another couldn’t continue with the natural progression of sound or my sanity. With my limited technical ability it’s always been necessary to have decent players in the band for both the records and the live shows. After finally fitting all the pieces together with Creighton, Ryan, Bill, and Tyler it feels like the band has matured beyond the idea of my voice being the heart and soul. Not only do their personalities make being in the band a pleasure for me, but each talent is key to what I consider one of the best bands around. And I don’t mean myself in any way. I really mean those 4 guys.
SRM: Understood. About Infinite Arms, your third album: Which songs felt to you like a process of reaching ‘further beyond’, both musically and spiritually?

BEN BRIDWELL: It was exciting to showcase everyone’s songwriting talents so that easily felt like a step in a brave new direction. But even besides that, there were a lot of subtle touches that moved us into new directions. Some of my favorites would be Tyler’s guitar intro to For Annabelle, the drama in the strings of Factory, and the raw intimacy of Evening Kitchen.

SRM: And of course, Infinite Arms, the single that you mentioned on another occasion and which I really love, too. There’s something almost mystical to it… Or, perhaps, the most accurate way to describe it would be ‘earthy’ and that is what I find so mystical…

BEN BRIDWELL: I think we’ve just begun to fully realize our abilities for this band. Hopefully we can make good on our potential and put out recordings that will live forever. Maybe we already have.

SRM: I suspect so; good music has this way of becoming immortal…

FACTORY BY BAND OF HORSES – ALBUM: ACOUSTIC AT THE RYMAN * LIVE