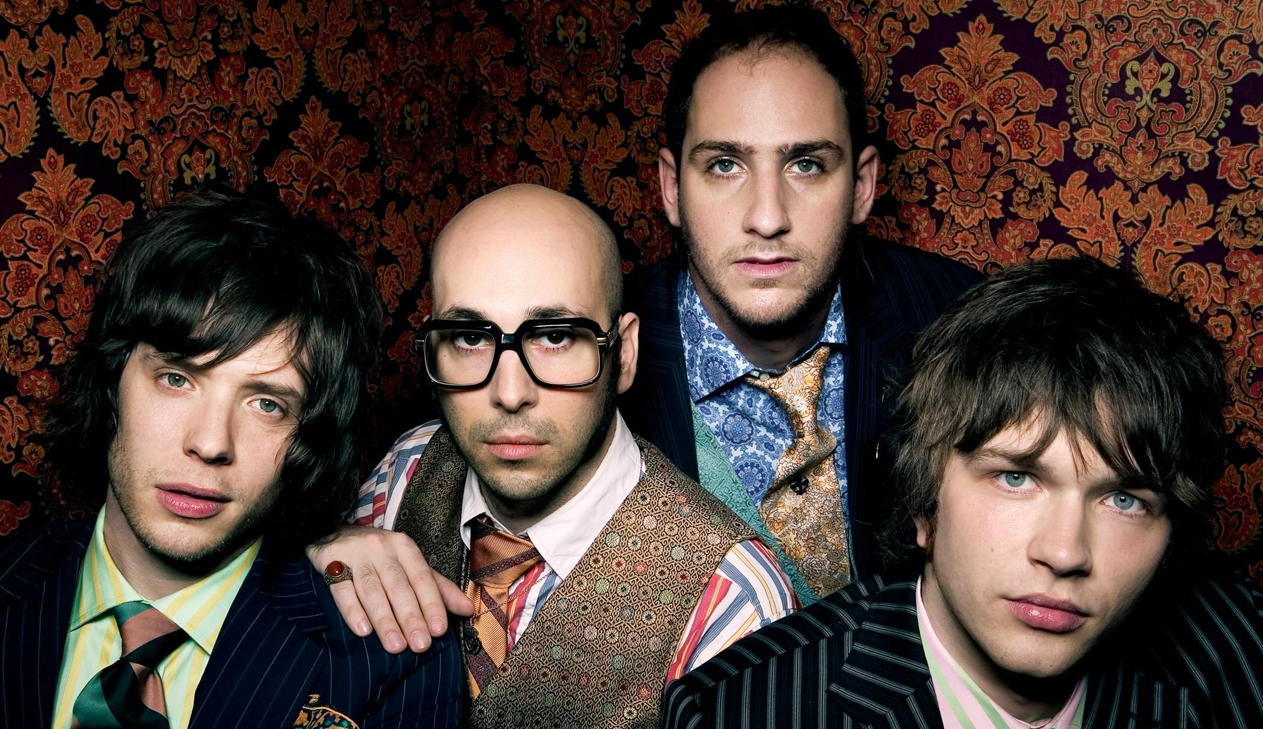 OK Go, revealing their true nature as time travelling cyborgs, as you can see.
Their video for A Million Ways, released in 2005, which featured the band in their back yard performing a dance choreographed by lead singer Kulash’s sister, Trish Sie, became the most downloaded music video ever with over 9 million downloads by August 2006. With Here It Goes Again, released in 2006, they reached over 50 million views in YouTube. It’s been up since then in terms of their musical career, but, then again, it’s not surprising, since musically, visually and technologically, OK GO LIVE IN TODAY’S WORLD and guess what, they also care for others, including the four-legged furry types.
SRM: Dan, thanks for taking the time to do this interview. You’ve been with the band since its ‘official’ formation, back in 1998.

Yours is some the most solid, earth-shattering drumming we have heard in a while, especially within the indie-rock scene.

What circumstances led you to meet the other guys, Dan? Had you already been playing or jamming with other musicians up to that point? Dan Konopka focused on an Earth-shattering mission.
DAN KONOPKA: Thank you very much! Super brief OK Go history: Damian and Tim have been friends since they were in elementary school. I met Tim (and original guitarist, Andy Duncan) while we were attending college. When Damian finished school he moved to Chicago IL and that’s when OK Go started. Prior to the band starting I studied music at Columbia College for a few years and played in a couple of rock bands around the city.

I played with as many people as possible in those days, with whoever was interested in jamming. A few years into OK Go I got very serious about getting better at studio drumming and started taking lessons from a few great teachers in Chicago. When I get down time now, I try to get in for lessons and keep growing as a drummer.

OK Go caught entangled in threads of  what could very well be various time-space dimensions.

SRM: It’s widely known that your creativity as a group, also with your music video clips, have gained you millions of YouTube hits and even a downloading breaking record, a Grammy Award and an MTV Nomination, amongst other accolades. How do Trish Sie’s choreography skills come into the picture?

DAN KONOPKA: Trish Sie’s ability to understand the threshold of our physical abilities is really the key. We aren’t really (good) dancers. She knows this, and with her experience teaching dance, and being a dancer herself, she really can tell how far to push us. She is such a creative person and when she has such untrained, unbiased dancers at her disposal like OK Go, the choreography can get very weird and I think as a result, totally new and fun.

SRM: Nice one, Trish! Some of the films that include OK Go material in their soundtrack are New Moon, Wimbledon, Normal Adolescent Behavior, In the Land of Women, Unaccompanied Minors, John Tucker Must Die, The Fog, Catch That Kid… TV series such as 90210, Gossip Girl, The Simpsons, Grey’s Anatomy, Scrubs, Men in Trees, CSI: NY, The O.C. and Smallville have also included OK Go songs. Dan, as an artist, have you ever thought of a particular kind of film or audio-visual project that you would just love to contribute to or score entirely? And what about OK Go, what’s been their latest soundtrack contribution? DAN KONOPKA: Personally, the idea of doing a movie score has just entered the realm of possibility. I’m in the process of learning a lot of new and exciting music production software, to allow me to write and record my own music. So maybe next year I may be thinking more seriously about doing that kind of work. Most recently though for OK Go, we wrote a major theme for the Morgan Spurlock documentary called Pom Wonderful Presents: The Greatest Movie Ever Sold. The song is called, The Greatest Song I Ever Heard.

SRM: Great documentary and song. From OK Go’s first self-titled album, released in 2002, to Hungry Ghosts there’s been a progression within the rock music styles from which your distinctive sound as a band seems to have drawn inspiration.

Many will recognize some reminiscence to Prince’s sound in at least two of the songs from your album Of the Blue Colour of the Sky (2010): Was this something that the band was consciously heading towards in the process of making that particular album?

DAN KONOPKA: Yes, I think when we started writing for Blue Colour Of The Sky we had a few focused influences. Definitely Purple Rain, and definitely The Pixies. We wanted to make a record that opened up a little more from the guitar driven sound we normally focused on. We felt like making more of a “dancey” record. Purple Rain was sort of a bench-mark to strive for, and Doolittle had a grittiness we wanted to achieve as well.

The Writing’s On The Wall, from OK Go’s album Hungry Ghosts
SRM: What’s the song writing process like in OK Go?

DAN KONOPKA: The bulk of the songwriting is done individually by each member, then, when we meet to record, we all pitch in our own ideas to the original demo. Some parts are totally overhauled if needed, and some stay exactly the same. Everyone comes to the recording session with an open mind to see how we can improve and develop the original idea.

SRM: Very organic, it shows. Both Damian with his guide titled How Your Band Can Fire Bush and the group in general, with songs like Invincible and your overall humanitarian contributions, have made very clear that, not only as artists but also as human beings you like to be well informed and act as you can on your own convictions.

When the group gets together, do these types of discussions take place often between you, guys? What are your views on the anti-government and anti-system protests that have been taking place all over the world in recent years?

DAN KONOPKA: We all share the same beliefs basically. If there is a view point any of us, or all of us feel strongly about we usually feel free enough to talk about it through our art or otherwise. Our political views haven’t been a huge focus as of lately. Incorporating the ASPCA in our video White Knuckles to promote adopting pets is something we all were excited and felt strongly about.

SRM: Ok Go is another example of how new technologies and social networking sites can serve creative types. You have also released at least a couple of free covers-records by now… Dan, in your opinion, does the freedom of having independent means surpass in intrinsic value the threat of possible monetary deficit in copyright violations? What are your ideas on these issues?

DAN KONOPKA: That’s an interesting question. Those violations seem to be the norm now. We need to embrace that fact and move around it. We are in a new age for making a living in music. It’s not like how it use to be. Being willing to learn and adapt and to change in every respect has allowed us to stay a band – and to stay successful. It’s the only way you can survive.  It’s new uncharted territory in the music industry; if you don’t figure out how to adapt you’ll probably have to go back to being a barista somewhere.

SRM: True. Many thanks again for taking the time to participate in this interview, and best of luck with everything.

Let’s enjoy another video clip, this time for the single I Won’t Let You Down.

RELATED LINKS:
OK Go’s Official Website >
If you are in the US, help fight animal cruelty and/or adopt a new friend with ASPCA >