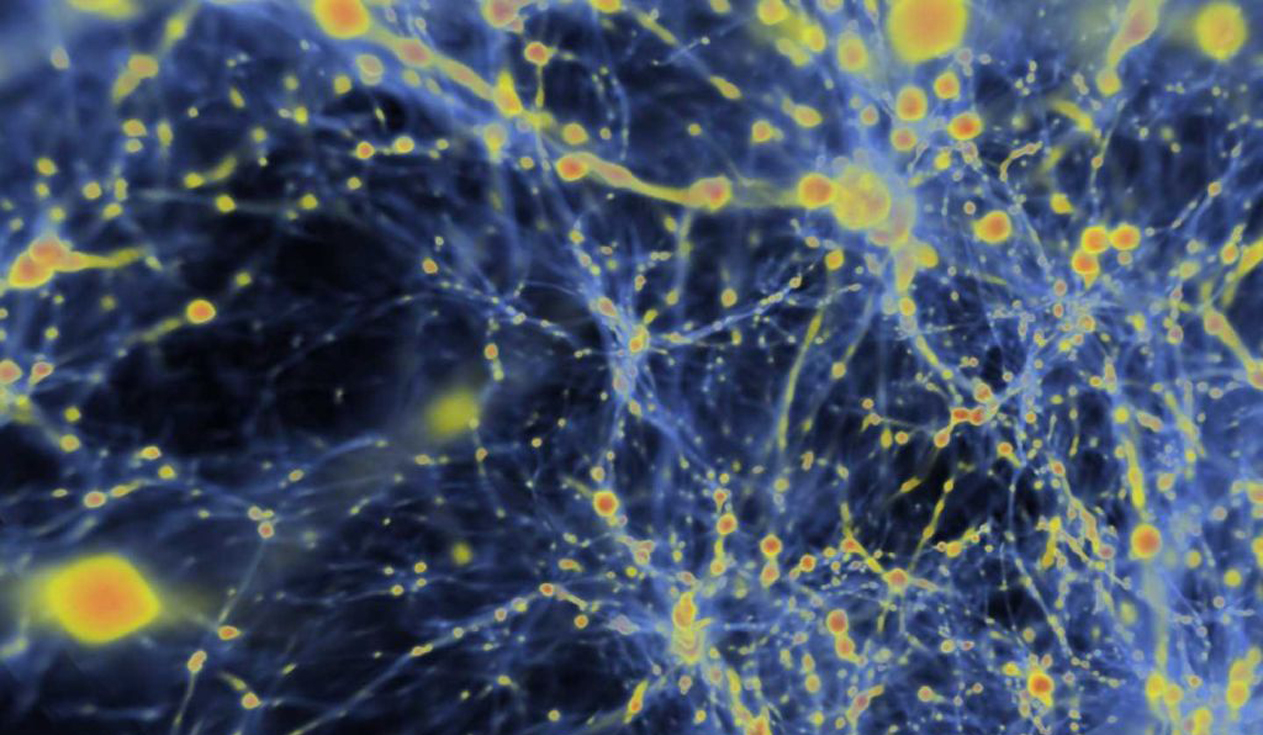 DR. RICHARD MASSEY is a physicist currently working as Royal Society Research Fellow in the Institute for Computational Cosmology at Durham University.

Previously, he was a senior research fellow in astrophysics at the California Institute of Technology and STFC Advanced Fellow at the Institute for Astronomy of the University of Edinburgh.

He is renowned for his work on dark matter, including the first 3D map of its large-scale distribution and its behaviour during collisions, and was awarded the 2011 Philip Leverhulme Prize in Astronomy and Astrophysics.

SRM: Dr. Massey, thank you for taking the time to respond to this Q&A, I am thrilled with your participation. What are the current theories on the composition of dark matter?

DR. RICHARD MASSEY: We still don’t know what dark matter is (“dark matter” is a placeholder name while we figure that out), but the odds-on favourite amongst scientists are the supersymmetric particles. Supersymmetric particles are a mirror image of everyday particles like electrons, photons and quarks. If they do exist in addition to our familiar world, they would be all around us but ignoring us completely – billions of supersymmetric particles would whizz through your outstretched hand every second. They don’t do any harm, except in frustrating particle physicists that we can’t catch them!

An aspect of supersymmetry that I find particularly exciting is that there would be a complete set of particles. Peer pressure in the supersymmetric world is expected to be very strong, so most of them would end up looking similar. But don’t be fooled – every familiar particle would have a partner, so finding one supersymmetric mirror image would be the first glimpse of an entire, parallel world that is going on all around us.

SRM: Where does the theory, in which dark matter provides the gravitational pull that brings the universe together, come from? Has it been proved that it provides a gravitational field or is it a hypothesis?

DR. RICHARD MASSEY: Inventing a whole parallel world of invisible particles does seem a bit crazy. Physicists wouldn’t continue to believe something so outrageous without many independent strands of evidence from different directions. What we know for sure is that there is more gravity in the Universe than we expected. Let’s start small (but this is astronomy, so not that small). Our own galaxy, the Milky Way, is spinning so fast that it ought to fling itself apart. Fortunately for us, an extra gravitational pull is holding it together. Zoom out a bit, and we see galaxies orbiting around each other. The individual galaxies move even faster, and are only pulled towards each other by even more gravity. Zoom out all the way, and we see the whole Universe still expanding after the big bang. It should have expanded so fast and spread out so far that there would never have been enough material in one place to build the Earth. We owe our existence to extra gravity slowing the expansion and holding the Universe together.

In all of these pictures, we can count, measure and calculate the amount of ordinary matter. There just isn’t enough for its gravity to save us – so we deduce that, however improbable, there must be extra, invisible mass. The presence of dark matter then explains every detail of the subsequent motion of galaxies; so we are confident it does exist, and supersymmetry theory provides suitable candidate particles.

Having said that, it is a subtle but important point that nothing is ever proved by science – it just hasn’t yet been disproved. Since all the current evidence for dark matter comes from its gravitational pull on things like stars and galaxies that we can see, if we had misunderstand gravity, we could have misinterpreted that pull. Competing theories (about theories) are beginning to be suggested, where gravity acts differently and no dark matter is required.

This may never be possible – Albert Einstein was a clever guy, and his theory of gravity has explained everything else in the Universe perfectly well until now, so improving it without destroying that agreement would be pretty contrived. But there are no sacred cows in science.

SRM: That’s right. What existing processes or devices help determine the difference between dark matter and dark energy? How do we differentiate one invisible thing from another?

DR. RICHARD MASSEY: While dark matter seems pretty exotic, at least it has the decency to act in a vaguely familiar way. Lumps of dark matter fall towards other lumps of dark matter in the same way that apples fall towards the Earth. Throughout the history of the Universe, the additional gravity from dark matter has helped pull things together: it tugged on the first clouds of gas to combine them into stars, holds them together inside galaxies, and is the scaffolding in which ordinary matter gets concentrated.

On the other hand, dark energy appears to be something completely unfamiliar to us in our everyday lives. It has the opposite effect of gravity on ordinary or dark matter. If you threw an apple into the air, and dark energy had its way, the apple would not come back down, but accelerate upwards, racing off into space. Fortunately for our lunch, there is a lot more matter and dark matter around the orchard, so gravity wins the battle.

The reason that there is more dark matter on Earth is that that it clumps together. Dark energy seems uniformly spread throughout the universe (we’re not really sure, but it might be an intrinsic property of space itself). In the vast regions of empty space between galaxies, there is less dark matter, so dark energy has the upper hand. On these cosmic scales, a 13 billion year long tug of war is underway between dark matter, which is holding the Universe together, and dark energy, which is pulling it apart. Even after all this time, they are finely matched and the outcome is finely balanced.

SRM: That moment when you completed the first ever 3D map of the distribution of dark matter must have been one of the most satisfying moments of your career… Would you be so kind as to walk us through this exciting process, from how you came about this particular project within your research to its fantastic results? What extent of the visible universe does your 3D map cover? DR. RICHARD MASSEY: The thrill of making a discovery is hugely exciting and addictive!

I’d spent years and written a whole thesis developing theoretical ways to map the elusive dark matter, so seeing concrete results build up from real data was a tremendous justification… and a relief.

The Hubble Space Telescope is a digital camera like no other.

It has a long zoom lens on it, which lets it see to the far reaches of the universe – but that means it has a very small field of view. To see a large patch of sky, we had to take a mosaic of adjacent photos them stitch them together using software.

Over two years, we gradually built up the largest photograph ever seen from orbit. Even so, this covers an area only about 9 times the size of the full moon – but with Hubble’s resolution, it contains more than 2 million galaxies. I patiently watched the map grow bigger, but the best moment came at the end, when overlaying it on a map of the ordinary matter. It was plenty big enough to see that that all those galaxies live inside a cocoon of dark matter. Sure enough, there are vast tracts of empty space between them, where presumably dark energy is at large.

Both NASA and the European Space Agency (ESA) are working on successors to the Hubble Space Telescope. They are called WFIRST and Euclid respectively, and come fitted with a wide angle lens, so we can map out the dark matter everywhere in the sky. I can’t wait to get my next fix, looking at a map that unveils the entire Universe of dark matter.

DR. RICHARD MASSEY: The Large Hadron Collider will investigate many things, but one crucial experiment called ATLAS is looking for evidence for dark matter that does not rely on its gravity. I mentioned that billions of dark matter particle whizz through your outstretched hand every second. Very, very rarely, one will not pass through. In your lifetime, two or three may bounce off. ATLAS is trying to spot the very rare events in which dark matter does interact with ordinary matter. Specifically, it does this via Einstein’s famous equation E = mc2. This says that mass m can be converted into a lot of energy E (as in a nuclear bomb), or a lot of energy E can be converted into mass m (to create new particles). In any collider, particles are accelerated to give them more energy, then smashed into each other to concentrate that energy into a small space, from where new particles emerge. Most known particles were discovered when they emerged from collisions like this, and the LHC is gradually re-discovering them as the collisions are fine-tuned. Supersymmetric dark matter particles are predicted to be much more massive than anything yet created, and I hope that the faster speeds in ATLAS will produce sufficient energy to create some for the first time. Interestingly, they will still not be seen directly. Once dark matter is produced, it is invisible! The key signature will be more energy going in than particles coming out. The missing particles would be the dark matter.

SRM: So fascinating… What publications would you recommend, in order to have an accessible in-depth information about this spellbinding subject?

DR. RICHARD MASSEY: Two really great books have been published about this in recent years. A very approachable (and amusingly illustrated) tour of current mysteries in cosmology is A User’s Guide to the Universe, by Dave Goldberg and Jeff Blomquist.

SRM: Dr. Massey, what is your personal perception about the mysterious composition/purpose of dark energy? Does the gap between the scientific and the spiritual/mystical narrow at this point?

DR. RICHARD MASSEY: Dark energy is an ethereal force that governs the fate of the Universe, and it is mysterious in the sense that we do not understand it. But we have quantitative, reproducible evidence that it exists, and measurements of its behaviour. In a hundred years, it will be just a page in a text book.

The gulf between science and spiritualism is drawn wider by their responses to mystery. Astronomers may occasionally borrow religious terminology to convey the awe we feel in studying the cosmos, but the scientific method is grounded in more than an expression of feeling. Science is uniquely equipped to ask questions, and its constant self evaluation continues to deliver worthwhile progress (even Einstein isn’t safe). Meanwhile, astrology is trapped ever further behind, in the medieval idiocy that stars care about our love lives. Sorry, but neither stars nor dark energy have a purpose – let alone a purpose for us. The humbling realisation we have obtained from dark matter and dark energy is that 95% of the Universe is unaware we even exist.

SRM: This was brilliant. Again, thank you very much for your time.