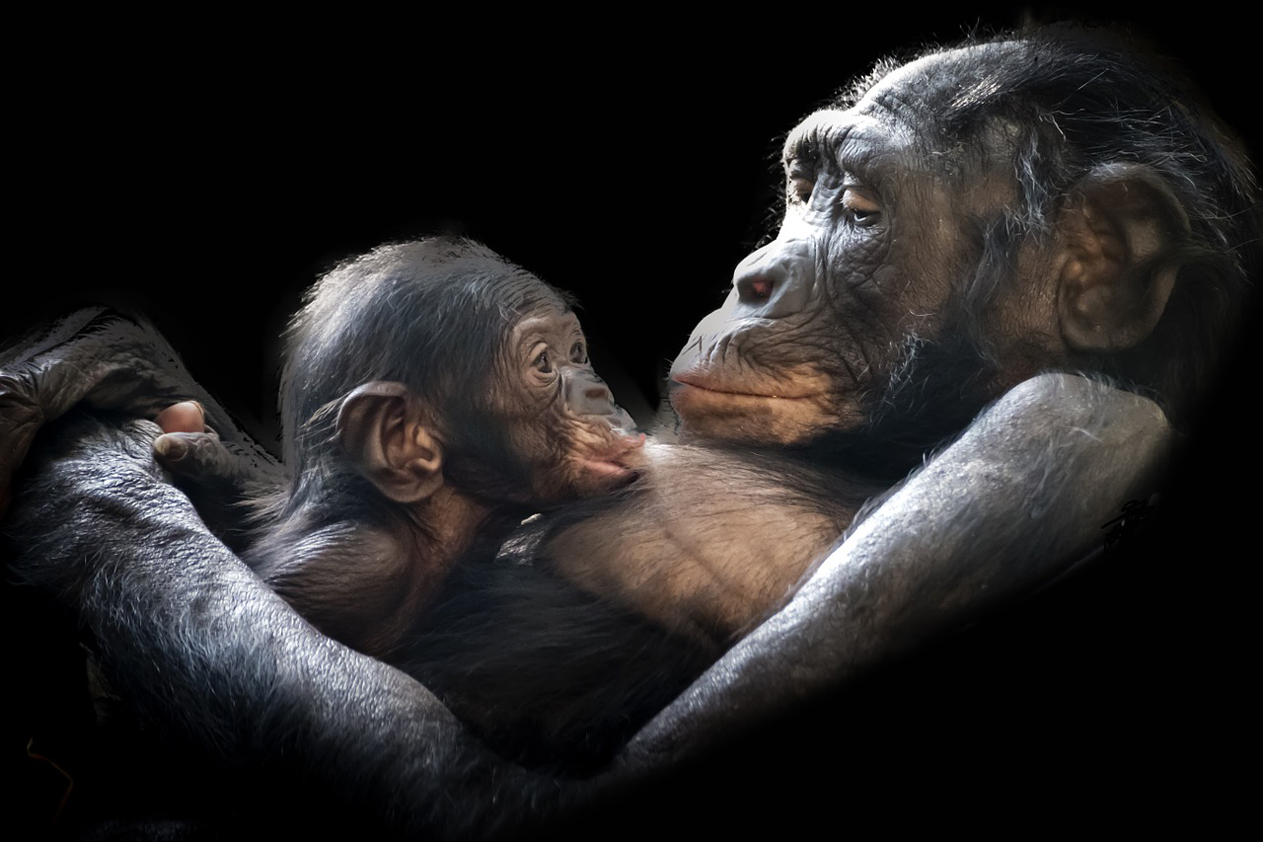 FRANS DE WAAL is a renowned Dutch primatologist and ethologist. He is the Charles Howard Candler professor of Primate Behaviour in the Emory University psychology department in Atlanta, Georgia, and director of the Living Links Center at the Yerkes National Primate Research Center..

He is also the author of numerous well-known books including Chimpanzee Politics, Our Inner Ape, the Age of Empathy and The Bonobo and the Atheist: In Search of Humanism Among the Primates. His research focuses on primate social behaviour, including conflict resolution, cooperation, inequity aversion, and food-sharing. He is a Member of the United States National Academy of Sciences and the Royal Netherlands Academy of Arts and Sciences.

SRM:  Professor de Waal, thank you for accepting my invitation to this interview, I’m honoured. The many years of your research and fieldwork with primates inspired what we know today as the field of Primate Cognition. What inspired you to study animal behaviour in the first place? What was your main goal?

FRANS DE WAAL: I study chimpanzees, bonobos and other primates mainly to learn more about them, but of course they also tell us something about ourselves. We are primates, after all. So, a second goal over the years has become to understand human society and how many aspects that we consider complex — such as culture, morality, politics — actually have roots that can be illustrated by the behavior of other primates.

For example, chimpanzee males form a hierarchy in which the smallest male may be the leader. How is such a thing possible? It is based on deal making by this male: he is probably more diplomatic than the others, grooms his supporters, gives them bribes and favors, so that when he is challenged by a bigger male he has coalition partners that help him. Such coalitions are part and parcel of human politics, and are now very well documented in chimpanzees both in the field and in zoo settings.

They are not necessarily based on kinship, because — as in humans — chimpanzees often strike these deals with non-relatives, so long as both parties stand to gain. This is why I read Machiavelli in the time that I wrote Chimpanzee Politics, now almost thirty years ago: the old Florentine philosopher had more to offer than most books on animal intelligence.

SRM: You have made highly important discoveries in primate cognition, discoveries that have led you to write over fourteen books around concepts such as empathy, cooperation and altruism within the animal societal structures. Would you say that, according to your knowledge and empirical data, animals do have conscientious thinking?

FRANS DE WAAL: Do you mean conscious or conscientious? Both are complex concepts, and since they are so ill-defined it is hard to say if animals have either. After all, we can’t ask animals to describe their feelings. But if you mean whether animals can reflect on what they do or what they have done, or can plan for the future, there are increasing indications. There are for example experiments that ask animals if they know what they remember (this is called meta-cognition), and other tasks in which they need to plan ahead. And in fact some primates do look into the future. An interesting spontaneous case was a chimpanzee at a zoo in Sweden, who was seen to collect big rocks and put them on neat piles within hand reach long before the zoo opened its gates, so that when he got to act out against the public he had all these projectiles handy to hurl at them. It is hard to imagine such planning without some conscious representation of future events.

SRM: What about what we so call ‘human emotions’?

FRANS DE WAAL: Animals probably have many of the same emotions that we have.

This is assumed in many brain studies, in which rats or monkeys show expressions of fear or anger when parts of the brain are stimulated that also in humans are active when we feel fear or anger.

So, neuroscientists generally have no trouble assuming similar emotions in humans and other mammals even though in the eyes of so-called behaviorists this is still very much taboo. They would prefer us not to mention animal emotions. If a baboon female returns a week after the disappearance of her offspring to the spot where it happened to climb high up into a tree and scan the environment while uttering plaintive contact calls, repeating her agitation and calling for weeks every time her troop passes through this specific area, it is hard for the human observer not to assume a sense of loss or grieving. Similarly, I have heard female chimpanzees who had lost an offspring wail and whimper, and sometimes burst out screaming in the middle of the day or night. We also know from fecal analysis that wild primates that have recently lost close kin show increased corticosterone, which is a hormone that indicates stress. Such behavioral observations and physiological measures suggest felt emotions.

SRM: Can a distinction still be made between groups of animals who consciously decide and feel emotion and those that don’t, or maybe we just don’t know enough about the latter? FRANS DE WAAL: Feelings are an aspect to which we attach extraordinary importance, since they are our most direct source of knowledge about the emotions. This explains why the greatest obstacle to the study of animal emotions is the common objection that “we cannot know what they feel.” While this is undeniably true, we should realize that it also holds for our fellow human beings. Most of the time, we trust that members of our species feel similar to ourselves under similar circumstances, a trust enhanced by our similarity to them, but it remains a mere assumption.

It is hard to verify this assumption unless one trusts human verbalizations of feelings, which relies on yet another assumption, i.e. that humans accurately perceive their own emotions. In light of these assumptions, postulating feelings in animals is not as big a leap as it may seem.

SRM: The results of your outstanding work have indeed leaked into the human realm, for it covers what are the origins of morality. ‘The Age of Empathy: Nature’s Lessons for a Kinder Society’, published in 2009, is a thought-provoking account of how empathy comes naturally to both humans and animals. Are we witnessing the end of an erroneous stream of thinking in which selfishness and self-preservation were seen as the only basic ‘natural instincts’ of all animal species?

FRANS DE WAAL: For the past three decades, scientists and popularizers have tried to tell us that we and all other animals are inherently selfish, and that the evolution of morality is an almost impossible affair, since nature cannot provide the caring for others needed for morality. I call this “Veneer Theory,” since it assumes that human morality and kindness is just a thin veneer over an otherwise nasty human nature. This is a position that goes back to Thomas Henry Huxley, a contemporary of Darwin, and has been repeated over and over even though Darwin himself disagreed. Darwin saw human morality as continuous with animal social instincts, and my own work is a return to Darwinian thinking. I am supported in this now by many recent studies that indicate that humans (and other animals) are far more altruistic and cooperative than was assumed. The field has radically changed in recent years. Psychologists stress the intuitive way we arrive at moral judgments while activating emotional brain areas, and economists and anthropologists have shown humanity to be far more cooperative, altruistic, and fair than predicted by self-interest models. Similarly, the latest experiments in primatology reveal that our close relatives will do each other favors even if there’s nothing in it for themselves.

Chimpanzees and bonobos will voluntarily open a door to offer a companion access to food, even if they lose part of it in the process. And capuchin monkeys are prepared to seek rewards for others, such as when we place two of them side by side, while one of them barters with us with differently colored tokens. One token is ‘selfish,’ and the other ‘prosocial.’ If the bartering monkey selects the selfish token, it receives a small piece of apple for returning it, but its partner gets nothing. The prosocial token, on the other hand, rewards both monkeys. Most monkeys develop an overwhelming preference for the prosocial token, which preference is not due to fear of repercussions, because dominant monkeys (who have least to fear) are the most generous.

SRM: In your opinion, what would be the single most important lesson that we, as human beings, could learn from the animal world?

FRANS DE WAAL: We can learn about the origins of our sociality, both in terms of hierarchies, competition and power games and in terms of empathy and morality.

We share both with our animal relatives, both the good and the bad, and should stop blaming everything we don’t like about ourselves on our biology (“we’re acting like animals!”) while claiming all good we do for our noble human nature. All of our tendencies evolved for a reason among the social primates, and once we understand this, we will better understand the dynamics of our own societies.

SRM: What are your views on eating animal meat? Is that natural in us and thus necessary and unavoidable, like in many other carnivorous species? How do we reconcile our carnivorous ways with the notion of animal conscience and emotion?

FRANS DE WAAL: Eating meat is as natural for our close relatives, the chimpanzees, as it is for us. In fact, hunting large game and sharing the pay-offs has probably played a major role in human evolution, resulting in reciprocity and cooperation at a level few other animals achieve. The mammals that do achieve high levels of cooperation are mostly carnivores, such as killer whales and wolves, and also chimpanzees and capuchin monkeys cooperate during hunts. So, meat has been very important to our lineage. Whether we need to eat meat is a separate question for me, since I think we are smart enough to find ways of obtaining the nutrients we need without meat. It doesn’t seem a strict necessity. I myself do like and eat meat, but the practices of the agricultural meat industry bother me for ethical reasons, and I would be very happy if we either could change those practices or raise meat in the absence of a central nervous system. What I mean is meat-growing plants where muscles are grown without growing the entire animal, so that suffering can be excluded. This possibility seems to be getting closer, and would remove the ethical dilemma for me.

SRM: Professor, would you be so kind as to explain what is the Living Links Center?

FRANS DE WAAL: The Living Links Center aims to understand human evolution by studying primate behavior. We speak of “living links” as opposed to “missing links,” since we have close relatives around that inform us about where we come from and why we behave the way we do. Instead of studying small pieces of ancestral bone, such as done by fossil seekers, we have actual live animals to work with, which are a far better source of information about behavior and cognition. That’s the origin of the name of our institute.