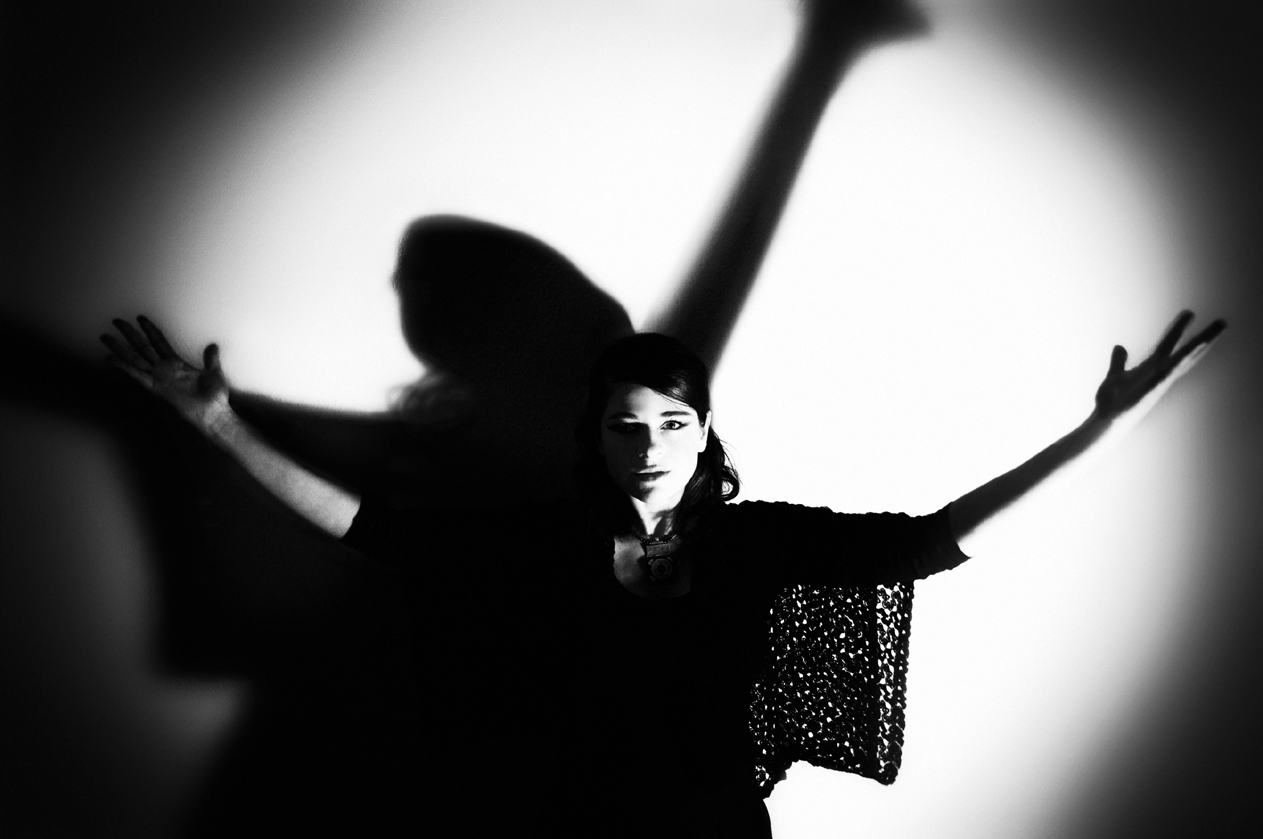 Original photo of cover image by FREDRIK KINBOM (Guitarist/Songwriter/Singer), check out his work at fredrikkinbom.com >

MOJO describes GEMMA RAY as ‘wondrous’, NME says she’s ‘untouchable’, and a host of other publishers and broadcasters have nothing but words of praise and reverie for her songwriting. From experience, I can say that she stole my heart, and ran away with it on a Motorbike. At least she left me with Milk For Your Motors. Ah, Ray, you wicked songstress, ‘the road’ is long… We’ll see each other again.

In the meantime, may the world know about the words we exchanged. Photo by ANDREW MORTLOCK (Director/Animator/Editor), check out his work at andrewmortlock.com >
In 2015 The Griswolds “Beware the Dog” directed by Andrew Mortlock was nominated by Rolling Stone Magazine for “Music Video of the Year”.

SRM: Gemma, it’s a pleasure to interview you, thanks for taking the time to answer this Q&A. You were born and raised in Essex, what are the memories associated with music that first come to your mind, what was your favourite album as a little girl?

GEMMA RAY: I didn’t really listen to music in an album format as a child as I didn’t come from a musical household. The only song I can remember my mum playing was Ob–La–Di, Ob–La–Da by the Beatles which successfully put me off them for life. I do remember the theme tune for the TV series Tales of The Unexpected scaring and exciting me in equal measures as a child, and with hindsight I think that’s been my biggest formative musical influence.  As an adult, composers such as John Barry (RIP), Krzysztof Komeda and some 60’s Italian composers conjure up that same magic feeling for me – they have something so sublime, otherworldly and unique that transports me into a different world – Their records are like portals into a better place.

SRM: I’ll pretend I haven’t heard that bit about the Beatles… (unidentified entity locks the ark and throws the key into the sea). At what point did you realise that you could make of your passion your profession; was it when Bronzerat Records was set up? Because, as far as I know, the label was created with the aim of getting your material heard by the public; was this your first professional support?

Motorbike by Gemma Ray, from the album Milk For Your Motors

GEMMA RAY: I’ve never viewed making music as a profession – just something I have always done obsessively, out of instinct, which grew and grew until songwriting became my main focus. Bronzerat were born of many things, one of them to put of a 7″ that another label were taking too long to do, and we grew together. Andy Bronzerat was playing drums in my band at the time, and he was one of the few people I met in London that made music like the world was going to end tomorrow. We inspired each other.

SRM: That’s amazing when it happens, indeed. Gemma, your works are a beautiful mix of a myriad of genres, at the same time as new, fresh, powerful. You have an incredible ability to create ambience, texture, feeling and thought, all within the same tune.

I feel that film may be an important source of inspiration to you; is this assumption right, and if so, what is the type of film that would best fit any of your albums?

GEMMA RAY: I’m waiting for the right filmmaker to make one specially for it!

Although the video Miranda Bowen directed for 100mph, from my album Lights Out Zoltar!,  definitely captured everything that song was about, which blew me away… I’m not sure that any films directly inspire what I write, although they certainly inspire me as a whole. Wickerman is something I never tire of and, more recently, I loved the cinematography of the Swedish version of Let The Right One In.
SRM: Ah, yes, that’s one of my favourite movies, too. In fact, I was lucky to interview (he doesn’t give many interviews) the author of the book, John Ajvide Lindqvist, who also collaborated with the script writing for that film version, check it out >. One of my favourite songs of yours is the soundtastic -I make words up; it’s incurable, I’m afraid- 100mph (in 2nd Gear), which you mentioned earlier. Gemma, please, would you share with us the story behind this composition?

GEMMA RAY: I write a lot when I drive, and this song was written when I was driving a Morris Minor to my sister house and the engine sounded how I felt. It’s about the struggle of getting from A to B but ending up at Z.

SRM: Yeah, I know that feeling. (Wait… Did she say that she writes when she drives?) I love the originality in your album titles, like, for example, Milk For Your Motors, same as all the previous, in particular, the funny What a Shame about Gemma Ray!, especially since I kind of guess its double-meaning, but, I’d also love to know about it in your own words… Gemma, what’s the shame?

GEMMA RAY: Bronzerat thought of the title because I’m a bit accident prone and the album was a happy accident…  and obviously it’s a pun on an album that already exists so it seemed appropriate enough to me!

SRM: (And it ties up with the whole writing and driving thing… dangerous, dangerous Ray…) When you sing, it comes directly from your soul but what songs would you say have a special place in it?

GEMMA RAY: I loved recording with Matt Verta Ray for many reasons but his approach was a big part of it all – recording for the love of recording other than to set out to make an album – it had a big impact on me.

I guess my favorite is maybe I Got A Crush On You – because I recorded that straight after playing a show in a NY basement, and Matt invited me to come and see his studio afterwards. That was when I recorded it, as well as Bolt In The Door, with no expectations.

It’s such a beautiful song to sing, and along with the lush sounds coming from all of Matt old vintage gear it reminds me of just closing my eyes and sinking into a cloud of reverb and delay and ‘blissing out’.

SRM: Ha! You’ve just made a whole new verb up… Seems we ‘suffer’ from the same tendencies (No, hang on, that’s actually a proper verb, according to Merriam-Webster; You… trickster…) Again, I am absolutely delighted to feature your wonderful talent, Gemma. Thank you for your time and all the best on the road.

GEMMA RAY: Thank you very much, same to you.